Our paper entitled, "Solid-phase microextraction coatings based on the metal-organic framework ZIF-8: Ensuring stable and reusable fibers" led by our collaborators from Universidad de La Laguna (ULL) in Tenerife is now published in Talanta.

Supervised by Prof. Veronica Pino, a part of this work is carried out in the Ameloot Group's lab in the context of Priss' short stay in Leuven.

In this project, highly stable ZIF-8 coatings for SPME fibers prepared by chemical vapor deposition of MOF (MOF-CVD). The preparation mode ensured SPME fibers with high inter-batch reproducibility while used in DI-SPME-GC-FID. These MOF fibers performed successfully for target hydrocarbons and personal care products and its performance was compared to that of commercial SPME coatings.

More details can be found here.

We further prove the robustness of the MOF-CVD process by demonstrating this time for MAF-6, a large pore MOF. The CVD process is based on the reaction of ZnO with 2-ethylimidazole vapor at temperatures ≤ 100 °C. A combination of PALS and Kr physisorption measurements confirmed the porosity of these MOF-CVD films and the size of the MAF-6 supercages (diam. ~2 nm), in close agreement with powder data and calculations.

In collaboration with Prof. Coclite's lab at TU Graz, we report the solvent-free powder synthesis and thin film CVD of a crystalline coordination polymer obtained from the reaction of ZnO with a vaporized bipyridyl-triazole linker. The article can be accessed here.

Following the proof-of-concept work on the chemical vapor deposition of metal-organic frameworks (MOF-CVD) and a demonstration of its potential in microelectronics integration, we now present the fully cleanroom-compatible process for the deposition of large-area MOFs. Led by Alex, the output of this international collaboration was recently published in Chemistry of Materials. In this work, we thoroughly discussed the optimization process and unraveled the mechanism of MOF-CVD which led to a process chart—a guiding paradigm in developing future MOF-CVD formulations.

This marks an important milestone in bringing MOFs a step closer to the industrial-scale microfabrication lines and the production of MOF-based devices.

Collaborative work on the role of structural defects in the adsorption and separation of C3 hydrocarbons in Zr-fumarate-MOF (MOF-801) is now published in ACS Chemistry of Materials. Led by Llwellyn's Group in Marseille, this work was made possible by the Marie Skłodowska-Curie Action Innovative Training Network, DEFNET (DEFect NETwork Materials Science and Engineering), a trans-European consortium of 9 academic institutions and 7 partner organizations. We are happy to be part of this collaboration!

Check out this paper through this link or in the Publications tab of our site.

The article from the publisher's website can be accessed here or in the Publication section of this website.

Our work on CVD of MOFs for low-k dielectrics is now published in Nature Communications!

Our work on the vapor-deposited zeolitic imidazolate frameworks as gap-filling ultra-low-k dielectrics has now been published in Nature Communications. Here we report a strategy for the integration of metal-organic frameworks (MOFs) as gap-filling low-k dielectrics in advanced on-chip interconnects. The proposed strategy is validated for thin films of the zeolitic imidazolate frameworks ZIF-8 and ZIF-67, formed in 2-methylimidazole vapor from ALD ZnO and native CoOx, respectively. Both materials show a Young’s modulus and dielectric constant comparable to state-of-the-art porous organosilica dielectrics.

The paper is accessible via an open-access platform through this link.

Together with the groups of Prof. Paolo Falcaro and Prof. Roland Resel (TU Graz, Austria), we expanded the scope of materials for MOF-CVD with Cu-MOF thin films. The orientation (crystallinity) was investigated by synchrotron measurements at the European Synchrotron Radiation Facility. Our study was accepted for publication in ChemComm.

Following a typical MOF-CVD protocol thin Cu and CuO precursor layers were deposited from the vapor phase and subsequently reacted with vaporized 1,4-benzenedicarboxylic acid (H2BDC) or trans-1,4-cyclohexanedicarboxylic acid (H2CDC). The resulting CuBDC and CuCDC films have an out-of-plane orientation with pore channels perpendicular to the surface, hence readily accessible for guest molecules as shown by QCM measurements. 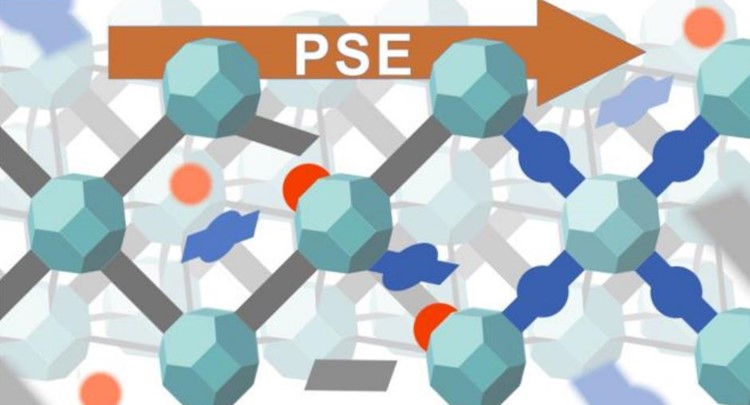